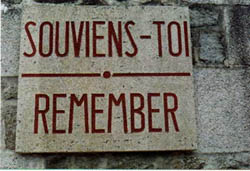 On June 8, 1944, the 2nd SS Panzer Division "Das Reich" moved from the town of Montauban, just north of Toulouse in southern France toward the Normandy invasion front, around 450 miles to the north. During this relocation, the unit committed two of the worst atrocities of the war in France: the massacres of civilians in the towns of Oradour-sur-Glane and Tulle. The following will briefly summarize those events.

Since October, 1943, seven Panzergrenadier units (including Das Reich) had been redesignated as Panzer divisions. These had roughly twice the strength of a comparable Wehrmacht Panzer division, with around 20,000 men and 200 tanks/armored vehicles. The Das Reich, by 1944, was largely comprised of conscripts, many or most of whom were not of the same standard as the original volunteer corps (now consisting of 2,500 survivors of Battle Group Lammerding, recently extricated from the Eastern Front). The division was to refit in the safety of southern France, while awaiting reassignment.

During the refitting period, Das Reich formed one of the three armored, one motorized and thirteen infantry divisions of Army Group G under General Von Blaskowitz. Unfortunately for the Germans, Hitler had placed this and the bulk of his armor a long distance from the expected invasion fronts.The division was commanded by General Heinz Bernard Lammerding, an early SS member and Waffen SS engineer captain at the outbreak of the war. At the end of 1943, Lammerding took command of the Das Reich. By all reports, he was an uninspired leader: his preoccupation with suppressing resistance activity, rather than urging direct transfer of his division to the invasion front likely contributed to the further dispersal of force required to contain the Allied beachead.

The French resistance had problems of it's own: it was plagued by internal conflict, as well as by lack of consensus by Allied commanders regarding the role these units would play. These problems would persist through the invasion of Europe. In general, the Communist elements (the FTP) favored the most direct and aggressive forms of confrontation, including direct assaults on military units and towns, while many of the FFI (the "Free French") favored the more "traditional" irregular unit approaches of harassing supply units and sabotage. 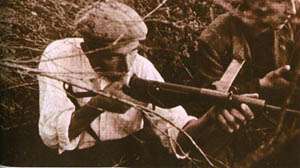 Regardless, the units were usually poorly armed, poorly coordinated and poorly lead. Their support from the Allies was often problematic and conflicting orders were frequent, due to lack of a unified command structure and divergent goals of the resistants. Most authorities consider their role in the outcome of the Normandy campaign to have been minimal, for these reasons. Only the inordinate delay in transfer of front-line units such as Das Reich could be viewed as major contributions and these diversions were largely the result of errors in judgement of the German command.

The training and refitting program for Das Reich was running behind schedule, in part due to diversions created as the result of operations conducted against the French resistance. For example, on May 11, 1944, members of the division engaged in reprisals against the towns of Montperzat-de-Quercy, St. Cere, Bagnac, Cardaillac, Lauze, caylus, Cadrieu, Frontenac, Figeac and Terrou, (amongst others), in which extensive looting, burning and killing of civilians occurred.

By June 5, 1944, Lammerding issued a memorandum to 58th Corps on the subject of anti-terrorist measures, in which he formally outlined the repressive measures to be effected against civilians in areas in which resistance units were operating. On June 9, Das Reich divisional headquarters issued an Order of the Day, "The Position with Regard to Guerilla Bands and Tactics for Combatting Them", which more extensively and explicitly outlined the scope of reprisals the division was to take (at the minimum) for infractions against the established order. These and other actions by the OKW Command and Lammerding set the background for subsequent mass reprisals against civilians in France and were consistent with Waffen SS activities by this and other units on the Eastern Front in preceding years. The anti-resistance role of Das Reich was confirmed during the early days of the invasion in an order from OB West, which transferred 2nd SS Pz and the 189th Infantry Division to the control of the 66th Reserve Corps, for deployement in the Tulle-Limoges area.

On June 7, word reached Das Reich command, that FTP forces had attacked the German garrison unit in the town of Tulle. The Der Fuhrer regiment arrived on the outskirts of town on June 9. The reconaissance battalion (under the command of Major Heinrich Wulf) entered the city without significant loss, relieving the beleagured defenders of the 95th Security Regiment

A total of 139 Germans were killed, some of which (the SS alleged) were German prisoners. A reprisal order was issued, the source of which is disputed. Direct responsibility for the subsequent reprisals however, became that of the senior staff officer, Major Albert Stuckler: Lammerding claimed he arrived on the 9 June, after the reprisals had already occurred, an allegation disputed by Colonel Stuckler and Major Wulf. In any event, a large number of male civilians were rounded up and 97 were randomly selected and hung from lamposts and balconies, under the supervision of Major Kowatsch. 321 additional captives were trucked off, presumably to Germany for forced labor. Incidentally, neither Stuckler or Wulf expressed any remorse for these actions, when interviewed in 1980 by Max Hastings, a British journalist. 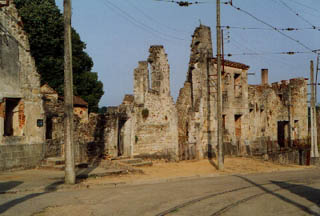 A worse reprisal occurred in Oradour-sur-Glane. This operation was the direct responsibility of Major Otto Dickmann, commanding the 1st battalion of the Der Fuhrer regiment. The incident that instigated this was the disappearance of Dickmann's counterpart from the 3rd battalion, Major Helmut Kampfe. Kampfe was a close friend of Dickmann, who assumed he was captured and killed by resistance units. Dickmann and Kampfe's successor (Hauptsturmfuhrer Kahn) selected Oradour as a likely site for reprisal. The exact reasons for this are not known.

On June 10, 1944, the SS occupied the town. The entire population of the town was rounded up. Men were separated from women and children. The women and children were herded into a church. The men were locked in 5 garages and barns, where they were shot. The buildings were then torched. The church with 400 women and children locked inside was also razed to the ground. The SS reported 548 "enemy" killed, with one SS dead and one "wounded". Post-war investigators estimated 393 residents of the town, 167 people from the surrounding countryside, 33 people from Limoges and 55 from other areas were killed during this rampage. 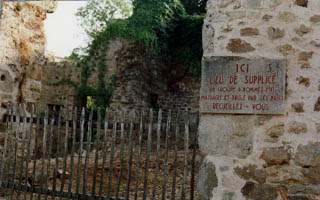 There were no official German sanctions for these or other SS atrocities. Rather, they were viewed only as an "excess of zeal", with no repricussions for any of the participants. The chivalric values of the SS were reserved only for the "deserving".

The actions of the SS set new standards for brutality in warfare, whatever the military accomplishments of these units might otherwise have been.